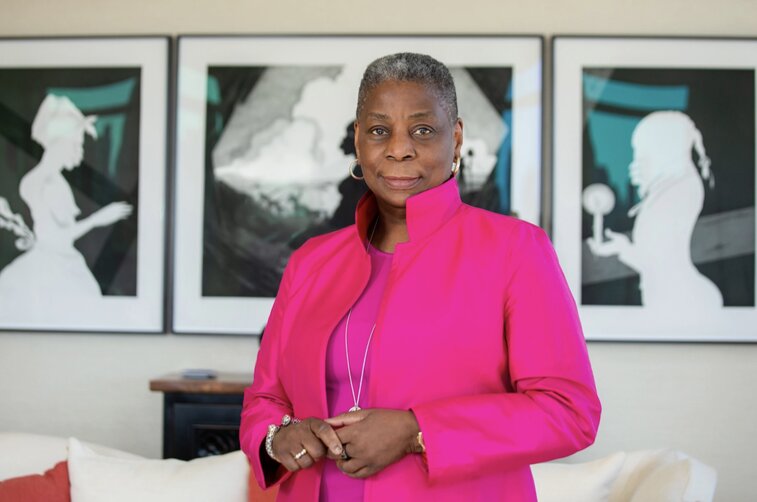 Ursula M. Burns was born on September 20, 1958, in New York, New York, U.S.A). Ursula is an American Business Executive, who served as the chairwoman of the board of the Xerox Corporation from 2010 to 2017 and as Chief Executive Officer from 2009 to 2016. She was the first African American woman to lead an S & P 500 company and serve as CEO of a Fortune 500 company.

Ursula was raised by her Panamanian single immigrant mother who was on welfare. She grew up on the  Lower East Side of Manhattan in the Baruch Houses, a New York City housing project. Her mother, Olga Racquel Burns took in washing and ironing jobs, bartered office cleaning for their medical needs, and took care of other people’s children in their apartment to supplement her welfare check. 1

“The program was essential. HEOP paid my full tuition and gave me a stipend for the subway and food. If I’d taken out loans through the Tuition Assistance Program, I would have been in debt for $80,000. My entire goal was to make money to help out my mother, but I would have left school with more debt than I could have paid off before her death.”

In 1981, she earned a master of science in mechanical engineering from Columbia University. Xerox paid the tuition for her master’s degree at Columbia, through a graduate engineering program for minorities. The program included a summer internship with the company.

Ursula met her future husband, a Xerox research scientist during her summer internship.

Lloyd, who was divorced, had extra rooms in his house, which Xerox rented for interns. I was one of them. 1

After earning her master’s degree, she joined Xerox full-time in 1981. She held several engineering positions in engineering, product development and planning. In January 1990, vice president of marketing and customer operations, Wayland Hicks asked Ursula to become his executive assistant.

“Wayland, who remains a dear friend, gave me specific leadership advice. He urged me to hone my bluntness by advising me not to intimidate people and to listen carefully to their ideas instead of dismissing or overruling them. He also cautioned me about my impatience with people who I thought were not good at what they did or didn’t carry their weight.”

In June 1991, then chairman and CEO of Xerox Paul Allaire poached Ursula from Wayland and she subsequently became the executive assistant to the CEO

“Paul taught me the value of slowing down. He also counselled me often about controlling my emotions, my tone of voice, and my choice of language so that they wouldn’t cloud the issue.”

Burns headed several Xerox business units between 1992 and 1997. She was put in charge of turning around the Xerox Facsimile and Office Color business, and head of the European Mid-Range Copier Group in London. In 1999, she was tasked with overseeing manufacturing and supply chain as vice president of global manufacturing.

“I was young for such a big job, only forty-one, and the age issue came up as it had in every previous job at Xerox. Everybody around me was older, even people who worked for me in manufacturing.”

In May 2000, Ursula was named senior vice president for corporate strategic services and began working closely with Anne Mulcahy, who would later become the first woman Xerox CEO in August 2001. In 2002, Xerox was nearly going bankrupt and she was tasked with implementing the CEO’s restructuring plans.

“In 2000, Xerox had revenues of approximately $19 billion and approximately $2 billion of profit. “You own a major part of the cost,” Anne said. “Go away and figure out how to reduce the costs without throwing away our future. We don’t want to go through all this and have nothing left that makes us great, so please do it in a way that keeps the company whole and profitable, a company your children and mine would want to work for.”

In 2002, Burns was named the first woman president of Business Group Operations (BGO) after the near bankruptcy crisis. As BGO president, she was responsible for most of the inner workings of the company—the engineering groups, research and development, product development, manufacturing, supply chain, procurement, information management—everything except legal and finance and sales.

Leading, I’d learned, is about integrating, not dividing. It’s about putting it all together and knowing where help is needed. You cannot be a good leader without having a great team you can depend on to help lead. - Ursula Burns

Through contract negotiation with Xerox unionized workers, outsourcing manufacturing and the layoff of 19,000 employees, she saved the company close to $2 billion.

In 2004, Ursula was invited to join the board of American Express while she was still president of BGO at Xerox.

“My leap over the normal path to appointment was made possible by Vernon Jordan, a member of both the Xerox and American Express boards, and Ken Chenault, the widely admired CEO of American Express, who had also been mentored by Vernon. Vernon, who knew my record at Xerox and knew I could be on track to lead the company, had championed me to Ken as a board member. I didn’t know Ken personally, but I certainly knew a great deal about him. He had a stellar reputation as an outstanding businessman and person.”

As CEO, she led the largest Xerox acquisition of a company when they paid $6.4 billion to acquire Affiliated Computer Services. In 2010, she became the chairwoman of the company board. She was the president and CEO of Xerox for nine years from 2007 to 2016. Burns handed over to Jeff Jacobson as CEO after stepping down from the position in December 2016.

Burns has served as a board member of major corporations such as American Express, Nestlé, Exxon Mobil, Uber,PQ Corporation, Lincoln Electric Company, Banta, Dames and Moore.

“A board’s culture is important for board members to understand, as it determines whether they can contribute successfully. Culture encompasses the unwritten norms of the group. It is not found in the governance manual, and it does not define how the board members operate or what they think is important. The ideal culture, in my opinion, is one that is inclusive and open, a culture in which everyone’s ideas are heard.”

Burns also led President Obama’s task force on STEM education, became a member of the BRT executive committee, and served as the vice-chair and then chair of the President’s Export Council from 2015 to 2016.

Burns started working full-time for Xerox in 1981 and was there for another thirty-six years. She started as a graduate intern and ultimately rose to become the first Black woman to serve as the CEO of a Fortune 500 company.

After leaving Xerox, she was elected to become the chairwoman of VEON and was appointed the CEO of VEON, following the sudden departure of its CEO.

Ursula’s husband died unexpectedly in January 2019. She has a daughter Melissa (born c. 1992) and a stepson Malcolm from Lloyd’s previous marriage (born c. 1989). 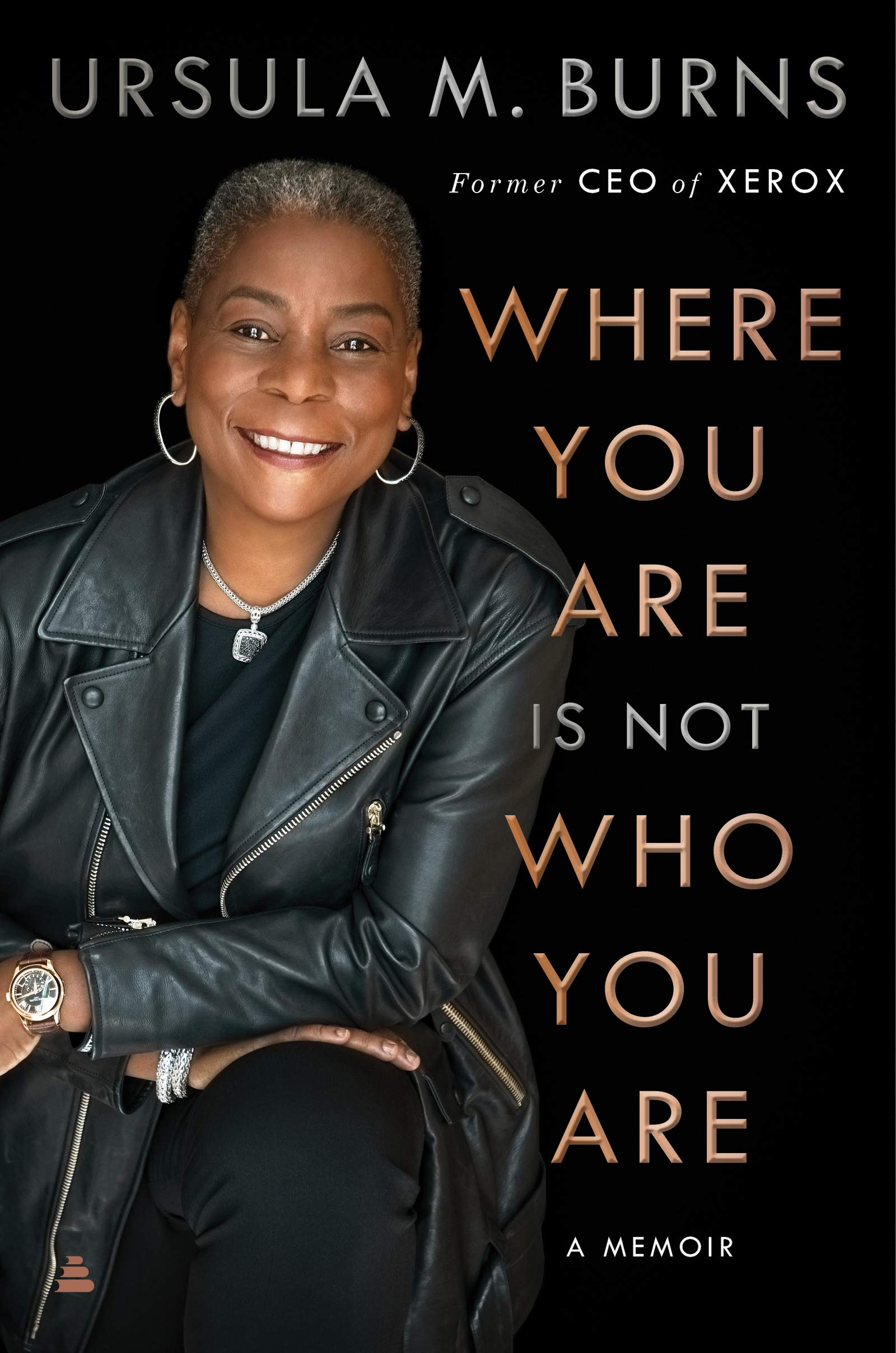 Burns released her memoir, Where You Are Is Not Who You Are: A Memoir in June 2021. She writes about growing up in poverty, lessons learned from her mother, becoming the CEO of Xerox, parenting, loss, grief and managing success. She writes:

“What I came to realize in the last year is what most people realize during their bereavement: life goes on. In reality, mine is not a melancholy life. After a year and a half, I’m more happy than sad; I’m strong and rebuilding a fulfilling new life.”

“Life happens one day at a time, and only in the retelling does it come together into remarkable, exciting, or insightful stories. In other words, you live your life not knowing the end of the story, and retell it only as if you knew what the outcome would be.”

Ursula Burn is a role model for succeeding in spite of the challenges that society places on you. As her memoir title says “Where You Are Is Not Who You Are”. Your history is not your destiny. Ursula Burn’s profile is part of our Black Excellence Series.